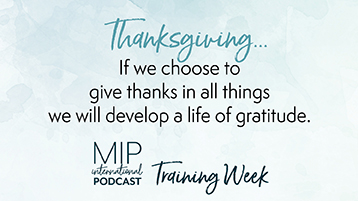 “Moms in Prayer women are the most thankful women I’ve ever been with because we practice giving thanks in everything!” Today, Lee Nienhuis is joined by Division Coordinators, Marcy Russo and Barb Cole, to talk about the life-changing benefits of the third step of prayer, thanksgiving. Listen in as they train and model praying in one accord with three women and how we share answered prayer requests each week.

Harvard Medical School Article, Giving Thanks Can Make You Happier

Download the Faithful prayer sheet for this month’s training

Marcy Russo lives in Fort Myers, FL and is married to her high school sweetheart. They have three young adult children: two married daughters and a son. Marcy and Greg recently celebrated 33 years of marriage and became grandparents this year when their two daughters had babies two months apart. Marcy first heard about Moms in Prayer 19 years ago on the radio after moving to FL when her children were just 3, 6, and 8. She knew immediately that this is what she needed to raise her children with, scriptural prayer coverage, like the women on the radio were demonstrating. Since then, she has been a group member, leader, area coordinator, FL state coordinator and is now the South East Division Coordinator serving the states of LA, MS, AL, GA, SC, and FL. She loves encouraging the next generation of busy moms, that the Moms in Prayer hour is time INVESTED, not spent.

Barb Cole is from the great state of Pennsylvania and is honored to serve as the Mid Atlantic Division Coordinator for Moms in Prayer. Barb has been a group leader since coming to Moms in Prayer 22 years ago when her oldest son was preparing to go to college 850 miles away. This group has transitioned over the years and is now filled with praying grandmothers! Over these years Barb has served as an Area Coordinator, Pennsylvania State Coordinator and now as Mid Atlantic Division Coordinator serving the states of Delaware, Maryland, New Jersey and Pennsylvania. She also loves serving as Country Helper for several Western Caribbean Islands. Barb and her husband, Dave, have been married 40 years and have two grown sons, two daughters in love, and four grandchildren.